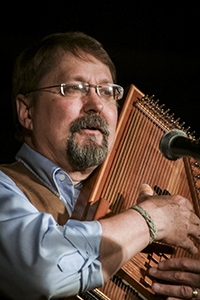 Rick Fitzgerald is a self-taught folksinger/songwriter, and is a mechanical engineer from Franklin, Wisconsin. An accomplished 6- and 12-string guitar player, he grew up influenced by the music of people like Peter, Paul & Mary, The Kingston Trio, and John Denver. He took up the autoharp in 1977 after seeing Bryan Bowers perform.  Almost immediately, Rick bought a ‘harp, began tweaking it to emulate “that sound” and soon arrived at a diatonic layout with fewer chord bars and doubled strings. He primarily played and sang for his own amusement until 1999, when he attended a workshop at the Warrenville Folk Festival, where it was again Bryan Bowers who introduced him to the wider world of autoharp players through the Autoharp Quarterly magazine, luthier George Orthey, and the Mountain Laurel Autoharp Gathering. Rick attended his first MLAG in 2005, absorbing the workshops and sitting in on jams with other musicians for the first time since college days. He entered the MLAG contest as a way of challenging himself to improve as a player. Four years later he was the 2009 Mountain Laurel Autoharp Champion.

When not working or performing, Rick volunteers his time as an educator, deckhand, and sometimes musician, aboard Wisconsin’s own tall ship, the schooner S/V Denis Sullivan. He also serves on the board of directors for the Mountain Laurel Autoharp Gathering, and is chairman of the Make Our Own (MOO) Music Gathering, a 501(c)(3) organization dedicated to teaching and preserving acoustic “living room music” in the American folk tradition.

Rick is known for his rhythmic, diatonic playing style.  He has recorded two CDs, Living Up to a Dream and Crossing the Water. He teaches privately and has taught at festivals around the country, including the MOO Music Gathering, MLAG, Buckeye Dulcimer Festival, and the Northwest Autoharp Gathering.

He and his wife Erina have two grown sons and a lovely granddaughter. They also raise and show Great Pyrenees dogs.